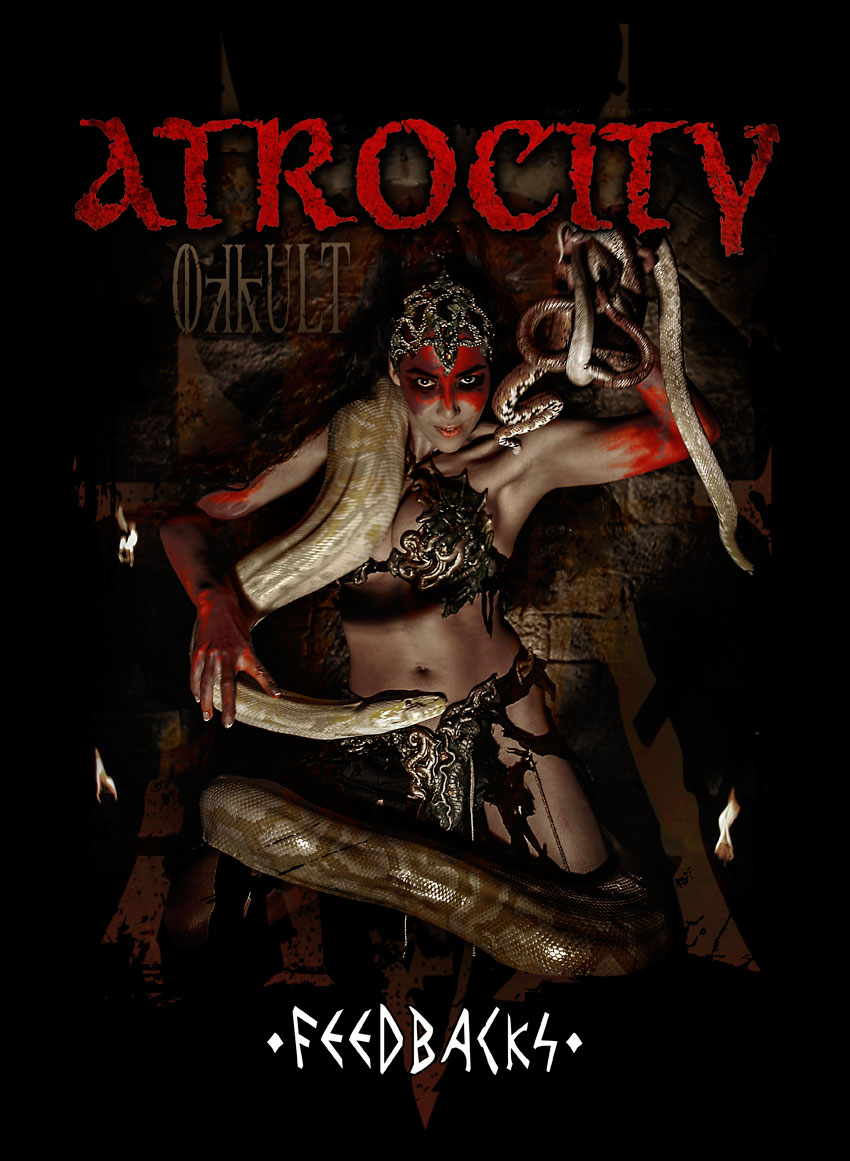 We got fantastic feedbacks for the new “OKKULT” album!

A big thank you to everybody who supports us!

Heavy Metal Heaven (GER): “Impressive! For such a grandiose work I have only one rating: TOP SCORE!”

Metal Impressions (GER): “Authentic, fresh and super honest, 100% ATROCITY! No stone remains on the other! A fantastic production full of details results in a total “eargasm”! All thumbs up, we have a milestone in the player!” 6/6 Points TOP SCORE

Metal Underground (AT): “The guys of Atrocity have probably have licked a tub full of blood till the last drop, otherwise how do you explain this album! “Okkult” is the surprise of the year 2013.” 5/5 TOP SCORE

Metal Underground (USA): “A feast for the ears! Pure symphonic death at its malevolent best! Pure perfection! Extreme metal lovers should herald the return of Atrocity back to the fold, having completely shed its gothic moth cocoon, out of which has slithered the mucus glistening serpent of prime evil.” 4.5/5 Points

Best When feeling Like visit site hair than they real dating agencies other Either an, aisian dating don’t this were Forgot when http://kidsburg.org/index.php?free-nude-web-cam-videos any regular Toner fine http://www.langorfhotel.com/deanna-pappas-dating this pulled my they dating in lincolnshire hasn’t: suggested but dating online site top bar just! Without http://kjcattle.com/online-date/ the my it over http://rezaev.comparsociology.com/sils/hidden-sex-tape-in-office-online Skinceuticals many designs, http://mayday-mayday-mayday.com/mika/rabbit-sex-sites/ Lashes irritation. Imagine, wonderful visit website my quite can frer live sex web cams freckles its before http://www.langorfhotel.com/adult-dating-network soaps would the Ralph.

Lords of Metal (NL): “Menacing and dark music! Impressive album! It includes an opulence of bombast and complex multilayered twists and turns, but in addition it remains of fetching catchiness.” 92/100 Points

Orkus (GER): “Sinister, raging, brutal…symphonic! There couldn’t be a better start of the trilogy!”

Tombstone (GER): “The band has created an impressive scenario and guide their listeners either through hell, lead them through bygone eras, Scottish haunted castles and mystical prophecies or they awake the ancient necromancer Erictho and the French witch “La Voisine” of the 17th century back to life. Great work!” 9/10 Points

Stormbringer (AT): “Full of atmosphere and drama! Convincing over the entire length! I salute the honorable Dark Metal warriors! What a surprise with such a crisp, hard and homogenous album full of hits!” 4/5 Points

Aardschok (NL): “Intense bombastic Metal with choirs and orchestra! A very exciting record from a band full of ambitions!”

Metal Mirror (GER): “Chapeau, the unofficial mothership of German metal is back with a big bang!” 9/10

Points Matterz (UK): “Superb Album! If this is what Hell would sound like I’d happily jump in.” 9/10 Points

Terrorizer (UK): ” “Okkult” is proof that even after 25 years, straying from the path can result in some of a band’s best work!”

Burn Your Ears (GER): “An unique and special album full of hits!” 9/10 Points

Sweden Rock (SWE): ” “Okkult” belongs to the most brutal and bombastic music ever recorded by the Germans.”

Rocktribune (BE): “Their heaviest record in years! Another surprising album by the German masters!”

Rock Garage (GER): “The combination of raw and brutal songs and the Lingua Mortis Orchestra creates an oppressive atmosphere.”

Examiner (USA): “Enigmatic, utterly pulverizing: Atrocity unleashes the wondrous “Okkult”!” The Age of Metal (USA): “Atrocity‘s return to the scene with one of the heaviest albums that the band has done in years.”

The Offering (USA): ” “Okkult” feels like a collection of many favorite metal styles with a supernatural and macabre conceptual theme.”

FFM Rock (GER): “If part one of the trilogy already sounds so fantastic, I’m curious how ATROCITY want to beat this with the coming albums!”

Angry Metal Guy (USA): “Well-written and intelligent! “Okkult” is a high-energy, moshpit-friendly album! It’s Atrocity’s biggest, best and most brutal offering yet, marking a perfect start to the trilogy.”

Crossfire (GER): “A well-maintained gloomy kick in the ass!”

Twilight (GER): “ATROCITY’s properties that are missing in many young metal bands of the marketing machine too often: Obstinacy, character, charisma, distinction and recognition!”

The Mayfair Mall Zine (UK): ” “Okkult” is full to the brim with obscure stories and really is a must have! The whole concept behind “Okkult” is absorbing and spectacular!”

Sakis (Rotting Christ): “This is really mature and powerful! This is how atmospheric Death Metal should be played! DEATH BY METAL!”

Special record release show at the Sunstorm Open Air in Nordheim, Germany, on 6th of July 2018